Patient Presentation
A female infant was born at 38 4/7 week gestation to a 34 year old gravida 2, para 1 mother. The mother was positive on Group B streptococcus screening 2 weeks prior to delivery.
Labor was induced because of late-term maternal hypertension. The mother received antibiotics during labor and delivery was by emergent cesarean section for fetal bradycardia.
The baby was vigorous at delivery but then became cyanotic at 4 minutes of age and received blow-by oxygen. Apgar scores were 4 at 1 minute, 6 at 2 minutes, and 7 at 5 minutes.
Her initial capillary blood gas was pH = 7.13, CO2 = 77, and base excess of +2. She was given oxygen by hood, 2 intravenous boluses of normal saline, and ampicillin and gentimicin after blood cultures were drawn.
She continued to have respiratory distress and was intubated and sedated before transfer
to a regional hospital. She was later extubated on day of life 1.
The pertinent physical exam on arrival showed a term infant with temperature of 35.6 degrees Celsius, heart rate = 106, respiratory rate = 40, and blood pressure = 69/40 with no evidence suggesting of coarctation of the aorta on 4 extremity blood pressures.
Her oxygen saturation was 100% on 40% oxygen. She did not appear dysmorphic. Skin showed a few red, blanching 3 mm macules on the face. Lungs were normal. Heart had a regular rate and rhythmn with no murmurs. Upper extremity pulses were equal to lower extremity pulses.
Abdomen had no organomegaly, normal bowel sounds and a 3 vessel cord. She had a good tone, strength, and appropriately reacted to handling.
The work-up included a complete blood count that showed a hemoglobin of 15.0, hematocrit of 45%, platelets of 233 with segmented neutrophils of 7889, lymphocytes of 5474 and bands of 483.
A C-reactive protein was &lt;0.5 mg/dl. Her chest radiograph showed some mild hyperexpansion and general haziness of the lung fields (see below).
Over the next day, the patient’s clinical course showed her to be more awake, her respiratory distress resolved and she was extubated. She had no glucose instability.
Her blood cultures locally did not grow an organism.
The diagnosis of presumed neonatal sepsis was made and she received a 7 day course of ampicillin and gentimicin therapy. Her complete blood count was normal at discharge. 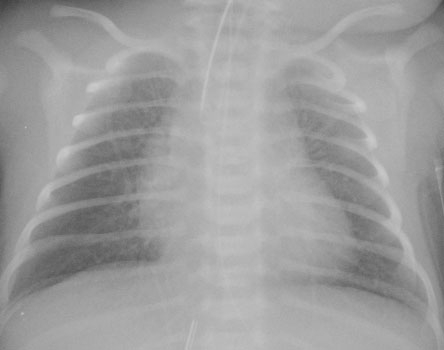 Figure 43 – AP radiograph of the chest on the first day of life demonstrates normally positioned tubes and lines along with diffuse fine interstitial infiltrates. The differential diagnosis for this finding would include transient tachypnea of the newborn versus neonatal pneumonia due to Group B Strep.

Neonatal sepsis is an important contributor to neonatal morbidity including poor neurodevelopmental outcomes and neonatal death.
Early in the 20th century, group A streptococcus was the leading cause, but in the 1970s group B streptococcus (GBS) emerged.
In the 1990’s universal antenatal screening was recommended at 35-37 weeks gestation with recommendations for intrapartum prophylaxis for colonized women.
These guidelines decreased the rate of early GBS infection from 1.7/1000 live births to 0.34/1000 live births.
Although the rate of GBS infection has declined, the proportion of mothers exposed to intrapartum antibiotics has more than doubled.
Concerns of antibiotic-resistance have also been raised.

Early-onset neonatal sepsis is defined as occuring within the first 7 days of life. Most (85%) infants present in the first 24 hours. Overall GBS neonatal sepsis has decreased with the use of antibiotic protocols, but the overall incidence of early-onset sepsis has remained stable mainly because of increased sepsis resulting from Escherichia coli.
This is especially true for premature infants and the onset may be extremely rapid.
The organisms are acquired as an ascending infection from the cervix or transplacentally from the mother.
Most early-onset neonatal sepsis is not culture-proven and many infants are defined as having “clinical sepsis” such as the infant described above.

Late-onset neonatal sepsis is defined as occuring between 8-90 days. It is acquired from the environment by colonization of the conjunctiva, skin, gastrointestinal tract, respiratory tract, or umbilicus.

Empiric treatment for early-onset neonatal sepsis is usually begun with and includes combined IV aminoglycoside and expanded-spectrum penicillin antibiotic therapy in the U.S. and Canada. Clinical situation and local pathogen sensitivities must be considered when selecting antibiotic coverage.

To Learn More
To view pediatric review articles on this topic from the past year check PubMed.